by Doug La Rocque
The Brunswick Planning Board learned more about plans to construct a two-story medical office and ambulatory surgery center on McChesney Avenue, near the Market 32 Plaza, at their Thursday, June 16 meeting. Representatives from Paulson Development indicated Upstate Gastroenterology and Ortho New York are two of the planned occupants. Items involved in the preliminary discussion include the height of a tower on the building, which would require a zoning variance, and a possible connecting walkway to Market 32.

by Doug La Rocque
Representative Elise Stefanik, whose 21st Congressional District will include a vast portion of Rensselaer County starting in 2023, held a meet and greet at the Brunswick Community Center on Tuesday, May 31 that was quite civil inside, but replete with about 30 protesters outside the building. Ms. Stefanik is a strong supporter of former President Donald Trump and has repeatedly criticized the January 6 Insurrection Public Hearings currently taking place in Washington, D.C. as a “witch hunt.”

These protesters were eventually locked out of the event, because as Brunswick Town Supervisor Phil Herrington told the June 9 Town Council meeting, they became “disruptive” with one individual “attempting to intimidate” those wishing to attend the meet and greet. He described the affair as a “private event” with the standard $150 rental fee paid in advance. Mr. Herrington added if those who did not agree with the Congresswoman just simply wanted to attend without protest, they would have been welcome.

by Doug La Rocque
It was more of what was not on the agenda that made news at the Thursday, June 2 Brunswick Planning Board meeting than what was on it. In particular, Planning Board Attorney Andy Gilchrist outlined some of the proposed changes to Town code in relation to multi-family dwellings and where they could be located.

Currently a number of locally zoned parcels have what is called an overlay attached to them. That means the restrictions or permitted uses for that zoned area can be altered if there is, say, an agricultural overlay as well. Anything allowed in the overlaid district would also permitted. These overlays, while well intended, have on occasion created some controversy, most recently involving the 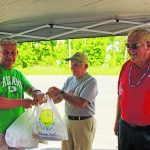 by Amy Modesti
On Monday, May 30, the Brunswick Elks Club #2556 continued their tradition of caring about the community and sharing their love of remembering our fallen veterans with their annual Memorial Day chicken dinner to-go event.

Event goers also took part in a raffle for a chance to win $200 worth of lottery tickets and $100 cash to benefit the CP Home Service Program, put on by the Ladies Auxiliary.

Brunswick Elks Club #2556 will present a corned beef dinner on Friday, June 3 and a clam steam luncheon Sunday, June 12. Reservations are required for both, and can be made by contacting Mike Pendergast at 518-286-1645.

END_OF_DOCUMENT_TOKEN_TO_BE_REPLACED

by Doug La Rocque
In March of last year, the Brunswick Town Council issued a moratorium on all two-family and multi-family construction in the Town, the result of several complaints from residents that these structures were creating a density problem, a sentiment echoed by the Town’s Planning Board. The conundrum lay in the fact these proposed developments were in areas allowed by Town code, but perhaps in practicality not the best locations.

That moratorium has been twice extended while a committee worked on reviewing these housing guidelines. That work is now complete and a new local law that would repeal the 2017 codes and replace them with the newest version was introduced. A public hearing on the new codes was scheduled for Monday, July 11 at 6:30 pm at the Town Hall. A copy of these codes is available for review on the Town’s website.

The changes to the codes 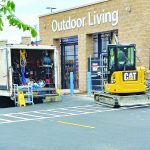 END_OF_DOCUMENT_TOKEN_TO_BE_REPLACED

by Doug La Rocque
In early spring developer David Leon’s representatives (MJ Engineering) returned to the Brunswick Planning Board with some changes to what has been labeled as the Aldi site, that included parking lot revisions, a change in size to the Wendy’s restaurant and installation of electric vehicle charging stations. They also unveiled a plan to 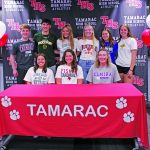 On Tuesday, May 17, nine Tamarac High School student athletes signed their letters of intent, committing to play for the respective college or university they’ll be attending. The students were accompanied by their families, the Tamarac Booster Club and Tamarac High School athletic and administrative staff. Those students are: END_OF_DOCUMENT_TOKEN_TO_BE_REPLACED

Brunswick – John W. “Jack” Crook Jr., 86, a longtime resident of Brunswick, passed away peacefully Monday, May 16, 2022, at Samaritan Hospital in Troy with his family by his side, following a short illness.

Born in Liberty, New York, April 25, 1936, Jack is the son of the late John W. and Viola (Muthig) Crook Sr. and the loving husband, for over 66 years, of Joan M. (Rifenburg) Crook of Brunswick, who survives.

Jack attended Troy City Schools. He entered the workforce as a young man and worked at several area businesses, where he learned and honed his automotive and mechanical repair skills. Jack earned the friendship and appreciation of the many whose houses he kept warm while working as a service technician for the Hastings Oil Company in Albia. After more than 35 years of service, through all types of weather and seasons, he retired in 2004.

END_OF_DOCUMENT_TOKEN_TO_BE_REPLACED

by Doug La Rocque
David Leon’s representatives, MJ Engineering, were back before the Brunswick Planning Board on Thursday evening, May 12, with a new rendering of what the proposed addition of an Aroma Joe’s Coffee Drive Thru would look like. The problem the Planners have is that it is not just drive thru but has a walk up window as well. Several members of the Board voiced their concern about pedestrians crossing an increased traffic flow, particularly since the rendering did not show any crosswalks or other protective features leading to that walk up window.