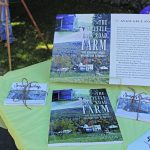 by Amy Modesti
Rensselaer County has a plethora of farms along its busy routes and little back roads. Among those is Hilldale Farm in Poestenkill. With farms serving as a learning laboratory for growing food, milking cows, or selling food in neighboring towns, one raises the question, “Why farm?”

That is answered in The Little Back Road Farm: The Reichard Family History and Memories, a book inspired by the late Fred Reichard, along with his family and friends, which focuses on the history of Hilldale Farm.

I met with Joycelyn, Linda, and Kimberlee King, for a sit-down interview to discuss the book, the Hilldale Farm Foundation Inc., and what farming means to them. They relived precious memories and expressed their hopes to help fund future Rensselaer County students.

The ARPA listening team of Poestenkill recently held the second in a series of public meetings to solicit further project suggestions from residents. The ARPA team gave a brief overview of the federal funding and the Board’s desire to use the funds for projects that Poestenkill could not otherwise afford and that would have long-term, lasting impact.

The ideas discussed will be added to the March suggestions and will be considered for feasibility, cost, and merit. There will be future discussions by the Board to review those suggestions and decide how to allocate the funds. Attendees at both the March and July public listening sessions expressed their appreciation for the Town’s outreach efforts, the openness of the discussions, and the mutual respect and appreciation of all the participants.

On Thursday evening, April 21, around 10:39 pm, the Rensselaer County Sheriff’s Office responded to a two-car personal injury motor vehicle accident on NY 355 ( Main Street) in the town of Poestenkill. Upon arrival, responding units observed a blue 2008 Honda Civic with significant front-end damage, with an occupant (driver) entrapped inside the vehicle. Responding units also observed a white 2018 GMC pickup truck, with heavy front drivers-side damage, and the driver outside of the vehicle.

The driver of the white 2018 GMC, Dylan Densmore, 26, of Poestenkill, was arrested on scene and charged with:

Densmore was arraigned in East Greenbush Town Court by the Honorable Judge Jessica Mocerine and was remanded to the Rensselaer County Jail with no bail, set to re-appear in court on Monday, April 25.

We would like to thank the New York State Police, Poestenkill Fire Department, Mohawk Ambulance, and the West Sand Lake Fire Department for their assistance during this tragic event.

Poestenkill has received $230,000 in federal American Rescue Plan Act fiscal recovery funds, some of which has been used for the Town’s Comprehensive Plan and the highway department. An additional $230,000 is anticipated later this year.

This is a lot of money for a small town. It needs to be used town-wide, fairly, sensibly and responsibly. Although deciding how to allocate the funds is ultimately the Town Council’s responsibility, the community’s thoughts and views are really important. 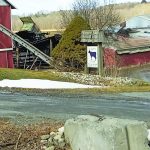 All Livestock Were Saved

With the brave assistance from two New York State Troopers, a Rensselaer County Sheriff’s Deputy and Poestenkill firefighters, rescuers were able to save a large number of calves from a burning barn early Tuesday morning at the Wagner Farm on Garfield Road. Firefighters were able to knock the fire down in a little more than 30 minutes. No injuries were reported.

Under new redistricting maps released today the towns of Hoosick, Pittstown, Schaghticoke, Grafton, Petersburgh, Brunswick and Poestenkill will move to Rep. Elise Stefanik’s district. The rest of the county will be represented by Congressman Antonio Delgado except the City of Troy which remains with Rep. Paul Tonko.

An eighth round of sampling of properties in Poestenkill for PFOA has been concluded, with one new property found to have above State-permitted levels, County officials announced on Tuesday.

Twelve properties were sampled during the eighth round of testing. Samples were taken from Weatherwax Road and locations that had been previously offered sampling from around the area of the middle school.

Of the twelve samples, six showed non-detections and five showed detections of PFOA/PFOS below the State maximum contaminant level standards for public drinking water, along with the one over the MCL.

With the conclusion of the eighth round of testing, a source for the contamination has

Submitted by the Rensselaer County Department of Health

A seventh round of sampling of properties in Poestenkill for PFOA has been concluded, with three new properties found to have levels of PFOA above the state-permitted levels, County officials announced on Thursday, December 2.

The results were finalized Wednesday and prepared for public release. The seventh round of testing results follows a sixth round last month in which no new properties were found to be

A sixth round of sampling of properties in Poestenkill for PFOA has been concluded, but no new properties were found to have levels of PFOA above the State-permitted levels, the Department announced on Wednesday, November 24.

The results were finalized Tuesday and prepared for public release. Testing is continuing on additional properties in