Plans by the Albany-Saratoga Speedway for their earliest season opener on Friday, April 1 were washed out. The track now plans to open the season on Friday, April 15. What did take the green flag was the first race of the year at the Orange County Speedway in Middletown, with more than $25,000 going to the winner. That turned out to be Matt Sheppard from the Rochester area. The other top five finishers were Mat Williamson, Dan Creeden, Ryan Godown and Andy Bachetti.

The Fonda Speedway opens for the season with all divisions on Saturday, April 16. The Green flag will fly at Lebanon Valley for Big Blocks, Sportsman, Pro Stocks and Pure Stocks on Saturday, April 23. The Devil’s Bowl Speedway in West Haven, VT has its first night of racing planned for Saturday, May 7.

The Albany- Saratoga Speedway in Malta has canceled tonight’s racing program because of weather. The racing season will now instead open on Friday, April 15. 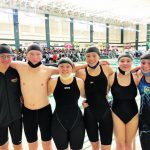 Top 8 finishes were achieved and school records broken for the New Lebanon-Berlin Varsity Swim Team who competed in NYS Sectionals this past weekend at Shenendehowa High School. Junior Alex Sotek, Sophomore Alison Slater and eighth grader Lance Schroder competed in individual events while Carol Kirsimagi, Riley Schwartz and Jordan Sotek rounded out the relay teams. Alex Sotek led the way with an outstanding meet finishing with two school records and two top 8 finishes, which hasn’t been done by a New Lebanon-Berlin swimmer in over 14 years. Alex finished 7th in the 100 Butterfly with a time of 58.78 and 5th place in the 100 Backstroke with a time of 1:01.50. Alison set a new school record while 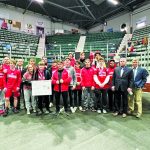 During the recent Section 2 Wrestling State Qualifier Tournament three local schools performed exceptionally well. Tamarac had several wrestlers place at the event, including Trevor Bishop who finished in first place, winning the Section 2 Championship. Also placing were Torin Bishop in second place, Ty Roadcap in fourth place, Austin Fitzpatrick in sixth place and Brice Retell also with a sixth place finish. Both Trevor and Torin Bishop will be competing at the NYS tournament on February 25 – 26 at the MVP Arena. Tamarac also won the Sportsmanship award and Jim Sheefler won JV Coach of the Year.

During the morning block of three games, Hoosick Falls 3276, Mechanicville 2906 and Stillwater 2860 had separated from the rest of the field. In the afternoon, Hoosick Falls was able to add to their lead,

END_OF_DOCUMENT_TOKEN_TO_BE_REPLACED 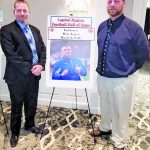 Ron Jones, who coached football at Hoosick Falls Central School for 23 years, was inducted as a member of the Class of 2021 Capital Region Hall of Fame Saturday evening.

Jones coached his teams to six straight sectional titles in the 2009-2014 span, state semi-finals and state championship games. At one time, Jones had more wins on 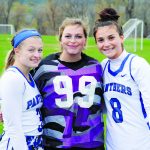 After defeating North Salem Saturday in the semi-final game, the Panthers learned their Sunday opponent for the Finals would be 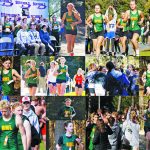