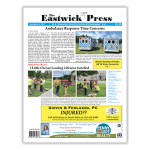 View this week's entire newspaper by tapping or clicking on the image:

In Support Of The HFCS Capital Project

It is important to remember that on Tuesday October 17th, from 9 a.m. to 9 p.m., you can cast your vote to support your public school’s capital project.
The Hoosick Falls Central School has been blessed with public support throughout its history. This is an opportunity to restore the building, addressing all of its current needs at bare minimum expense to us, the taxpayers of Hoosick.
Support your community, the students and the staff. Show your pride in a district that is achieving high standards, and in our beautiful 57 year old facility.
All details and ongoing Community presentations can be found on the school website:www.hoosickfallscsd.org. Or call the district office at 518-686-7012.
Sincerely,
David Sutton
Hoosick Town Council

Let’s Restore The Cupola!
To The Editor:
Upon reading the July 21 article on the New Lebanon town board meeting, I must give some input on the subject of the Union Free School cupola. First of all, what a fitting title to the article “Cupola to be saved ….. One of these days.” How often I’ve seen the wheels spin on such projects. Like the beautiful Dutch Reformed Church in Nassau. Years ago that was put on the back burner for so long as people haggled over its demise that eventually, it had to be put out of its misery and be destroyed, leaving a blank space in its fine history.
My wife and I took a ride down to the location of the cupola and were surprised at its condition after being perched atop the school for so long. I stood scratching my head and tried to see how one would spend $40,000 to $80,000 to bring it back to life. I submitted a proposal to restore the cupola to satisfactory condition for a fraction of the low price of $40,000 to Councilman Baumli. He did acknowledge receipt of this bid at the beginning of the meeting, which was much appreciated. This bid also included moving the cupola in three pieces to my shop to begin work on it after removal of the very heavy slate roof to be reinstalled after the restored cupola is positioned on a suitable base somewhere in the town. I thought what a great addition to the Town’s coming anniversary year!
Soon after the short discussion on the cupola, they went back to discussing amendment after amendment on laws already on the books.
So much time spent regulating signs that local business people use to bring income into their businesses as well as making the town more appealing to new businesses. Of course, there should be regs of some sort, but a cute plywood cup of coffee advertising a local cafe was far from non-appealing to the eye. Everyone I have spoken to about it has expressed the same feelings about its loss on Route 20/22. Signs are the one least expensive way to advertise a business and let people know what is available in the establishment. And the hours and hours of time spent “regulating” the installation of solar panels on residential housing when we all know that solar power will soon become as prevalent as electricity as a utility and not nearly as ugly as the time worn poles and miles of wire strung up and down our main street. Let the CEO make the decision when someone comes in to inquire about setting up a solar array for their use to cut down on utility bills and also save our environment. These solar regulations are so confusing that even the people on the committee seem confused when discussing it at meetings. And all these regulations seem to do is grow the already huge legal fee budget over the amount allowed and now move another $25,000 to help with the drafting of even more rules and regulation in this town. By the way, this figure is still much higher than the proposal I made on repairing the cupola to satisfactory condition. At the high end of cupola restoration of $80,000 for a historic restoration, does this mean the materials used would be of historic value as opposed to store bought lumber and nails? Just where did Supervisor Teal get these figures!? Shouldn’t we the citizens know that? Last I was taught was that a government is “by the people, for the people.”
So many questions and so little time. I will keep a close eye on the future of the fine cupola and am wondering if an inexpensive tarp could protect it until a decision is made.
Timothy Laraway
Route 20, New Lebanon

Memorial Day is a day set aside for remembering those who bravely laid down their lives while in service to our country. END_OF_DOCUMENT_TOKEN_TO_BE_REPLACED

The Town of New Lebanon is facing two major issues this month. 1) The unwelcome building of a Dunkin Donuts, Drive-Thru store in the center of town, and 2) The School Board Budget Vote. END_OF_DOCUMENT_TOKEN_TO_BE_REPLACED

Thanks To David Borge

It is important to acknowledge the service of David Borge in his term as our mayor.

END_OF_DOCUMENT_TOKEN_TO_BE_REPLACED

I am writing this to attempt to inform the residents of New Lebanon about an encroaching peril to the future of the town. END_OF_DOCUMENT_TOKEN_TO_BE_REPLACED

On January 10, 2017 my wife and I attended the monthly meeting of the New Lebanon Town Board. I brought up the subject of the Town being the only municipal building I had seen in recent weeks not flying the American flag . This came to my attention as I travel many miles throughout Columbia and Rensselaer counties admiring Old Glory flying in the breeze high and proud. This is the symbol of our freedom earned so costly by our brave men and women of the armed forces.

I thought it might have just been overlooked by the county employees, but was told by the Supervisor that the man in charge of this task thought it would be better if the flag was not put out until more favorable weather arrived. Also the Town does not have proper night time lighting, which would make it necessary to remove the flag at night and raise it again after sunrise. I even offered to donate the cost of a flag if finances was the problem. And a solar flag light certainly would not break the budget and that would eliminate the need for any further raising and lowering of our national symbol.

I got home and my thoughts went to soldiers leaping into the frigid ocean while landing at Normandy, and the sight of soldiers wading in chest deep waters in Vietnam. Also more presently the brave men and women marching in the sand parched deserts of Iraq far, far from families and homes.

I believe that raising and lowering a flag once a day is a small sacrifice to make as we go home to our warm homes to sit with our families and friends. I voted and campaigned on my own for many of the current board members. If you think New Lebanon should follow the lead of all other municipalities and schools and veterans organizations in this Town, please drop them a line and tell them how you feel. I did my part but was met with an unsuitable answer about something so important to me as a Navy Vet and a man who proudly flies Old Glory night and day in support of our brave troops.

Bad things happen to good people all the time. Judy Quackenbush is a prime example. END_OF_DOCUMENT_TOKEN_TO_BE_REPLACED

As I was watching folks carry water to their cars at Tops in Hoosick Falls back in January, I saw in my mind’s eye a vision from a trip I made to Uganda. END_OF_DOCUMENT_TOKEN_TO_BE_REPLACED