Berlin – David F. “Pa” Shuhart, 75 died Monday, July 18, 2022 at Southwest Vermont Medical Center in Bennington, VT. He was born in Hoosick Falls on May 5, 1947, the son of the late Clifton G. “Sonny” Shuhart, Jr. and Jennie F. Wysocki Shuhart. He was raised and educated in Berlin. He was a logger with his father and later worked at Berlin Lumber Company. He was employed for over 32 years by Saint Gobain of Hoosick Falls as a tape machine operator, before retiring in 2012. He was also the owner of Pa’s Country Car Wash on Route 22 in Berlin.

He was a caretaker for many houses in the Berlin area and also snowplowed for many people.

He enjoyed camping and NASCAR. In his early years he enjoyed fishing with his grandfather in the Adirondacks. He loved shiny red fire trucks and owned two of them. He also enjoyed driving his convertible.

He was the beloved husband of 44 years to Pat Perkins Shuhart; devoted father of Aletha (Bob) Cummings of Greenville, NC, Derrick (Aimee) Shuhart of Southbury, CT and Davey Shuhart of Cherry Plain; proud grandfather of Andy Cummings, Calvin and Sawyer Shuhart; dear brother of George C. (Donna) Shuhart, Carol A. Hammersmith and Allen J. Shuhart all of Berlin. He is also survived by several nieces and nephews.

Relatives and friends may call at the Thomas M. Barber Funeral Home, 66 Armsby Road, Petersburgh on Friday, July 22 from 11 am to 1 pm, followed by a 1 pm funeral service officiated by Diane Mosher. Interment will follow in Berlin Community Cemetery.

In lieu of flowers, contributions may be made to the Berlin Volunteer Fire Department, PO Box 269, Berlin, NY 12022 for the care and maintenance of “Speedy.” 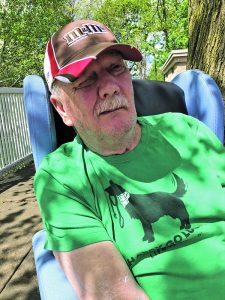