Petersburgh – Elaine Marie Jones left this world behind on January 2, 2022. Elaine was born March 3, 1945 in Baltimore, Maryland from two of the most wonderful people ever, Mary and Owen Ringwald. She grew up in Wilmington, Delaware, where she brought her tireless spunk and energy to the home she shared with her three surviving brothers, John, Art and Alan. She is also survived by Woody Gillies and their three children, Bonnie, Ian and Daniel; her children’s spouses/partners John, Christine and Julie; eight grandchildren, David, Michael, Allison, Stephen, Amy, Abigail, Nate and Jace; three great-grandchildren, Madeline, Theodore and Rosie; and her husband Don.

Elaine could play the piano. Play as in jamming out the Bumble Bee Boogie and Scott Joplin, not Chopsticks or Do-Re-Mi. She cooked from scratch and her pies were internationally famous. But if someone were ever to serve her a TV dinner, she’d say “I never ate a meal that I didn’t like if someone else had to make it.”  She cooked rabbit, chicken, duck, goat, lamb, venison and eggs, all straight from her backyard. One goat was spared from her dinner table, which became her biggest claim to fame when she sold it to the governor of New York for his dinner table. Elaine grew hundreds of organic vegetables, herbs and fruits, before organic meant overpriced and trendy, and made pies, cobblers, jams and jellies from the gallons of wild blueberries, blackberries, raspberries and elderberries she picked from her property. She could knit a hat in three seconds flat, and could start and finish a novel a few seconds after that.

A Celebration of Life will be held for Elaine in late May. If you knew her and would like further details, please contact her children at elainejonescelebration@gmail.com. If you would like to make a donation in her memory, please consider the American Heart Association. 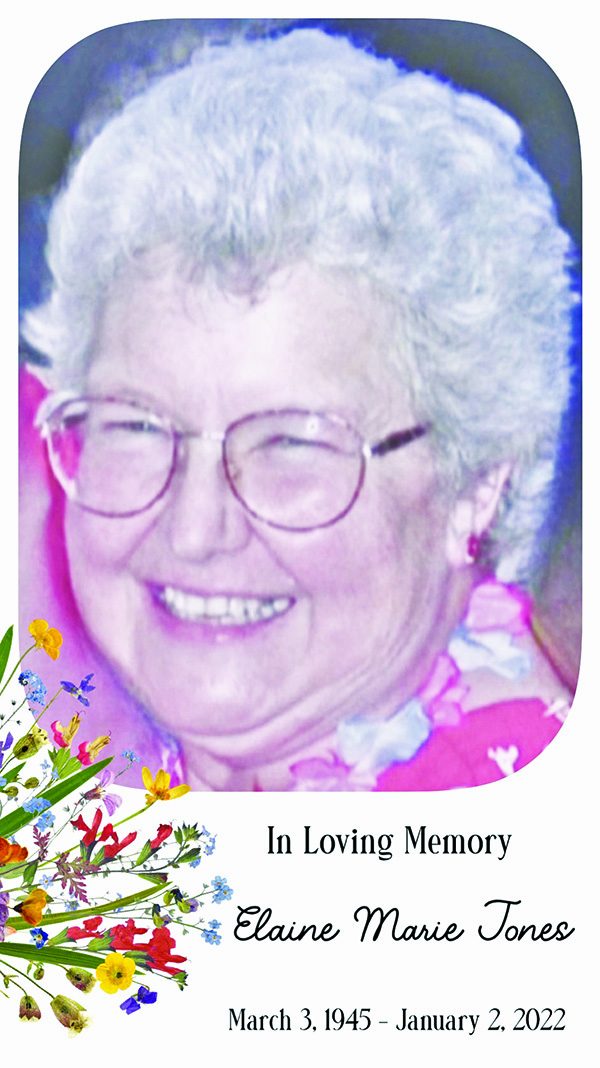