Patricia A. “Pat” Carknard, 85, passed away on Thursday August 20th at the Southwestern Vermont Medical Center. She resided at Wood Park Apartments in Hoosick Falls and was the wife of the late Edward Carknard.

Pat was born on November 23, 1934, in Hoosick Falls, daughter of the late John A. and Mary (Hyland) Mahar. She graduated from St. Mary’s Academy and received her LPN degree from the former Putnam Memorial School of Nursing. Pat worked at the former Putnam Memorial Hospital and the VT Veteran’s Home in Bennington, VT for several years. Upon her retirement, she volunteered as a Gray Lady at the hospital. 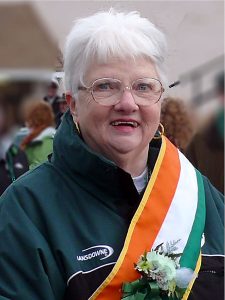 She was a member of the Immaculate Conception Church and Derby Club both in Hoosick Falls. Pat enjoyed playing bingo, pitch, bowling and socializing with her many friends at Wood Park. She also was the Grand Marshall for the Hoosick Falls St. Patrick’s Day parade which was a very special honor to her. For the past 15 years, she was involved with and thoroughly enjoyed participating in the EC Fund established in memory of her oldest son Eddie “C”.

A Mass of Christian Burial was offered on Tuesday August 25th, from the Immaculate Conception Church Parish Hall on Main Street in Hoosick Falls. Burial followed the mass at St. Mary’s Cemetery in Hoosick Falls.

Memorial contributions may be made to either the E.C. Memorial Fund or the Immaculate Conception Church through the Mahar Funeral Home, 43 Main Street who are handling the arrangement.