Lois was born in Brooklyn, NY on April 9, 1927, the daughter of the late Olaf and Emily Eilersen Sjursen.  She was raised and educated in Brooklyn and lived in East Meadow, Long Island, NY for many years where she raised her family and was a homemaker.  She moved with her husband to Stephentown, NY part time in 1967 and became a full time resident in 1983 living on South Stephentown Road. 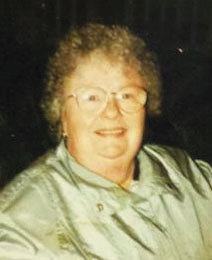 She was a member of the East Meadow Fire Department Ladies Auxiliary, the Stephentown Federated Church and belonged to the Eastern Star while living in Brooklyn.

Lois loved to crochet and spoil her grandchildren.

Funeral services will be held privately for the family on Monday, June 1 at the Hall & Higgins Funeral Home, 457 NY 43, Stephentown followed by her burial at 12 noon at the Gerald BH Solomon Saratoga National Cemetery.

In lieu of flowers, contributions may be made to the Stephentown Federated Church, PO Box 10, Stephentown, NY  12168.

Arrangements are by the Hall & Higgins Funeral Home in Stephentown.  Condolence book at ParkerBrosMemorial.com.